To Projects That Can't Be Mentioned

With testing and model knitting, there are projects that come up that you can't talk about, or post pictures. Sometimes this is just for a few weeks, for one project it was over two years. Two years of no ravelry project page, no instagram, no showing what I had knit to anyone. Some of those projects I may never be able to share. This post is to them. However, what is a post with out a picture? I can't show you any of those projects, but one long lost project was recently released in Defarge does Shakespeare. 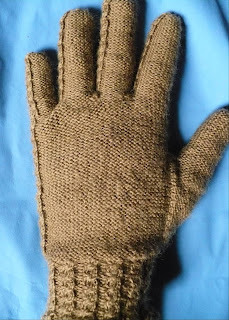 Testing for this pattern began in July 2012, you can imagine my feeling when it was finally released this year. These are listed as Lavinia's Gloves on Ravelry.

I have one project currently in testing that will not be a lost project, Sarah's Shawl. More details on the release post, but here is a photo of the prototype. 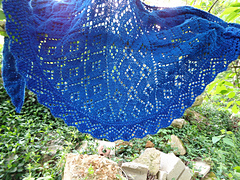 One last comment, I'm happy to be the host of Hiya Hiya Apple Leaves Sock KAL. It runs until August 10, 2015, so there is still time to join. If you join and knit two socks before the deadline the pattern is free, and you could win prizes. Some speedy knitters are already finished, but the fun is just getting started. At least watch the thread for the wonderful sock pictures! Here is one finished pair (of course they are blue): 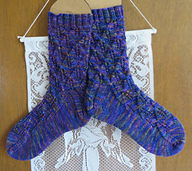