After thinking about what to post today, I realized what I really wanted to do was introduce myself. My name is Rachel, though you will find me as 100Creations on most social media. That username is frequently available. When I first started online I worked on so many different crafts I wanted a name that reflected that. I wasn't a knitter yet, hadn't discovered crochet either. I had learned how to bead, and wire metal work. Cross-stitch, embroidery, sewing, and many other crafts came first. I married in 2004, and discovered crochet that same year. My mom had saved the stitch by stitch magazines she had received, and passed them on to me. They have many crafts included, but start from the very basics and progress through making your own patterns and advanced items. I made granny squares with scraps of yarn I had (probably from plastic canvas).  Then for some reason didn't crochet for awhile. Later I picked it up again, making more granny squares. Either I picked the wrong hook, or my gauge really changed. The new squares matched the old in number of rounds, but five of the old blocks matched four of the new. After figuring this out, I was able to join all the blocks to make a afghan I still have. It is a classic granny square blanket with scrap center rounds, then a final black round bordering all the blocks.

I can't remember exactly my next project, but for little while I started crocheting anything I could. I still had no real knowledge of gauge, just that it was really important to match the pattern. I also had no idea what weight of yarn meant. I figured if you could crochet the yarn tight enough to make gauge that was the goal. Thus the sweater that could have stood on its own (no pictures available). Some projects weren't complete failures. I crocheted another afghan using this pattern, with blue strips for the hearts and white for the diamonds. I did the math for a skirt and finished most of it. That pattern still needs to be finished, but the idea was sound. So I really started improvising quickly. Ravelry wasn't around then, or who knows what would have happened. Thus began my yarn and pattern obsession (there really is no other word for it).

My pattern obsession lead me down another road. So many pattern books would have crochet patterns, but were mostly knit patterns. Or even mostly crochet patterns, but I really liked the knit patterns they included. My Grandma had tried to teach me how to knit. After I begged and begged! But I had lost interest after deciding it was to hard. That may have been because I had in my head that the only proper way to knit was to pull the stitch through, then pull the yarn (so it couldn't go anywhere, I guess), making the it very difficult to move the yarn across the needle. Then to try to draw the yarn through that stitch to make another was hard work. My first project was a scarf. My practical Grandma made sure it would match my coat, so it was in stripes of white and tan. I quickly decided that wasn't difficult enough or something. I wanted to make a vest. Not sure why Grandma let me start one project when I hadn't even finished the first. I choose white for the background, and four? other colors for striped bands. Stripes again! I was positive knitting just one color would be to boring. I knit away on that, checking the length frequently. Not by measuring tape, but by holding it up until I decided it was time to start the neck. Again, grandma must not have been immediately available because I didn't form the neck by decreasing. I had learned to cast off and decided that was the proper way to 'get rid' of stitches. This would have worked, had I ever finished the knitting. I never even finished the half front I started on.

So having decided I couldn't knit, crochet became my main yarn craft. But so many people knit, surely it wasn't that hard! Thus learning knitting came back into my life. That is a journey for another day.

How did you learn to knit/crochet? Do you do any other crafts?

This was one of my first crochet projects: (so glad I already had a digital camera, even if it and I weren't very good at taking pictures). Note 'quality control' daisy checking it out. 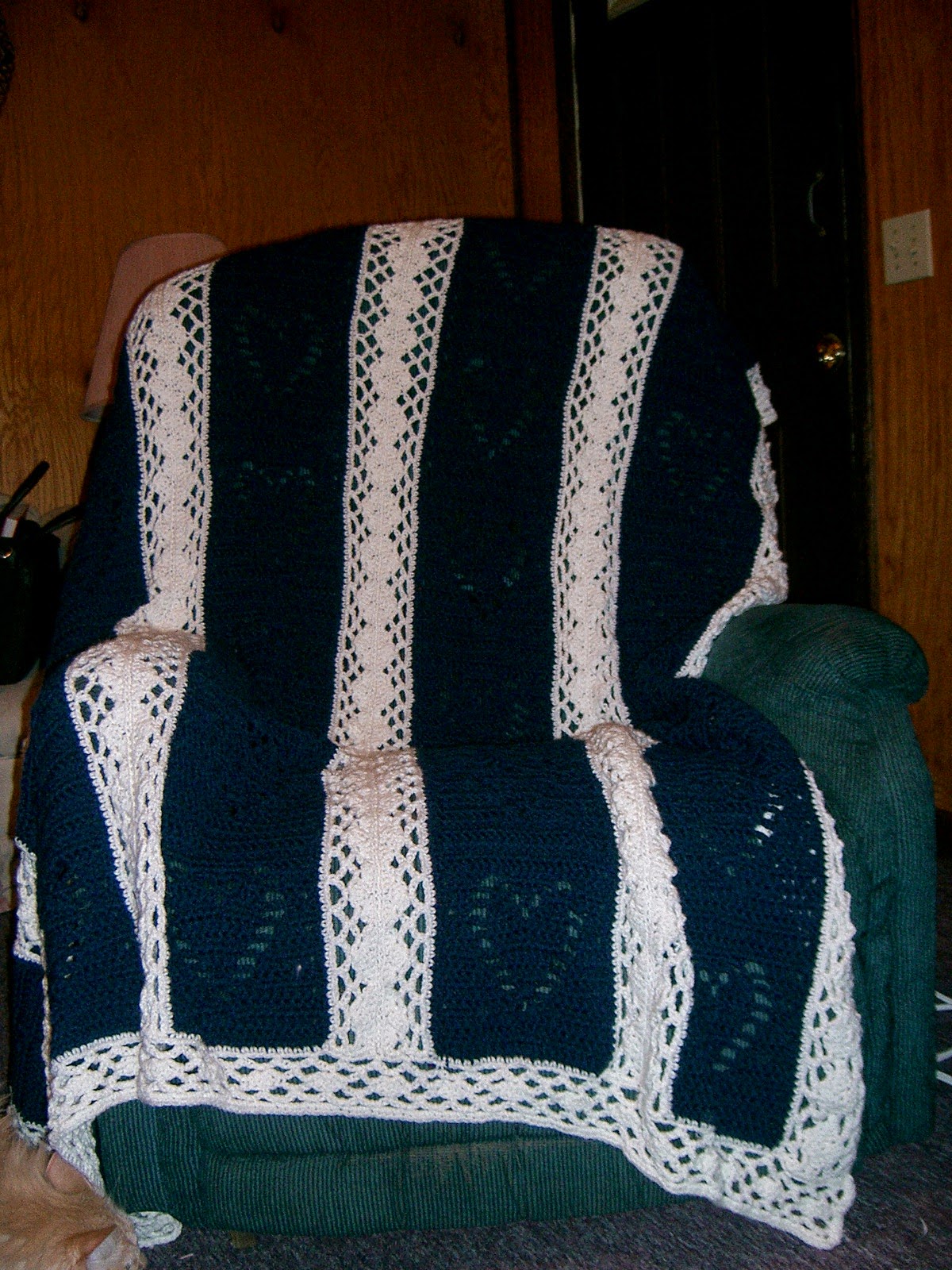 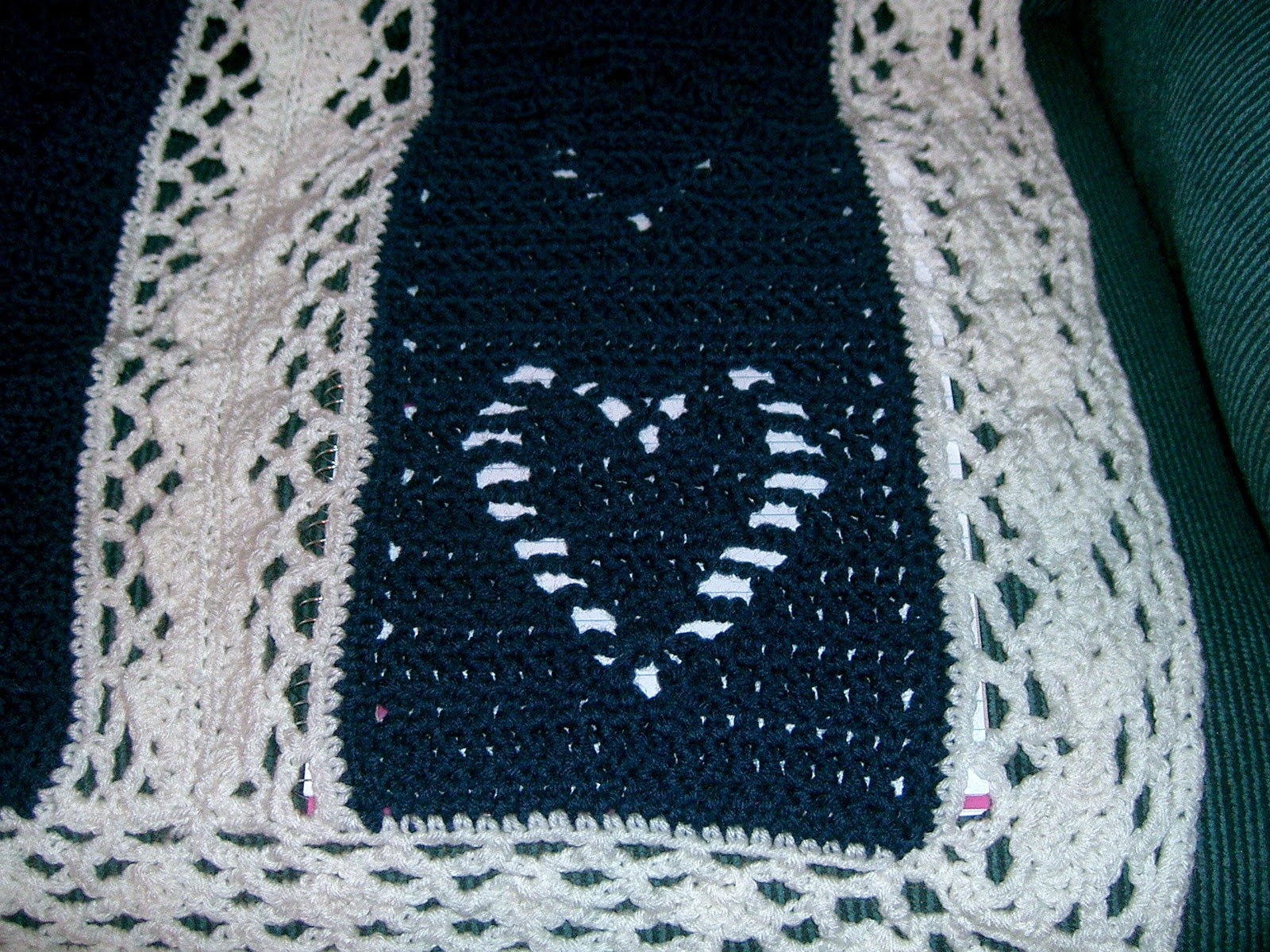