You know that feeling when you finish something that was so much fun to make you want to cast on another one right away? It is completely different from the "so glad that is finished", and the "why did I start that?". It is related to "That turned out nice, I might use that pattern again for..." (then you never ever use that pattern again. There are too many other interesting patterns in the world to knit the same twice.) This pattern Should have been a chore, one I was just relieved was over. It wasn't. I'm happy to introduce you to (after taking forever to get pictures) my Linen Stitch Scrap Scarf. 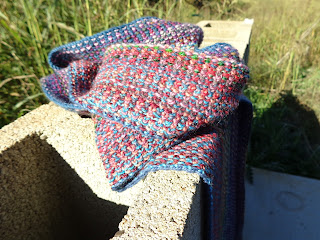 Gorgeous, right? This has such a great woven texture to the knitting. Lets look closer: 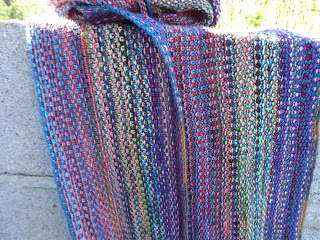 I think I cast on 300 stitches. I should have made a note, and really should have blocked my swatch. Duh! Wanting a really long scarf, the cast on was really long. After the knitting was done this scarf was about 84 inches. 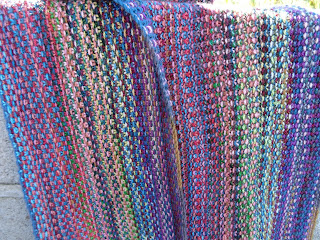 After blocking the scarf is 7 inches wide, and 94 inches long. Not counting the fringe. LEts see the fringe: 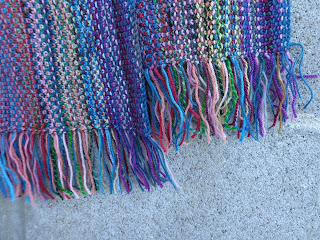 At the beginning and the end of each round i had extra stitches I knit into. Then I k1tbl and started the linen stitch. This made a great edge, and easy fringe. I worked in the round, and cut the yarn between the rounds after binding off. The result is a light weight, warm scarf i'm going to be using for a long time. It weighs 6.7 ounces, and is just the bright accessory I needed for winter. Turns out linen stitch worked in light weight yarn (mostly fingering) on large needles (US #7) makes great scarf. Now I want a wrap. But i'm going to need more scraps, or use whole skeins. It probably won't need to be as long.

Just had to include a picture of another finished item: 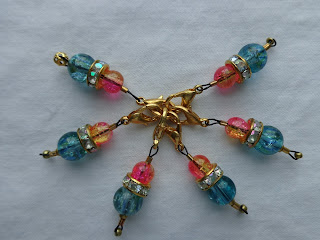